Inflation vs Recession: What’s the Difference and Which is Worse?

In an economy, two main factors determine how well it is doing: Inflation and recession. Inflation is the increase of prices for goods and services in an economy, while a recession is a period of time when the economy is shrinking.

So which one is worse? This blog post will discuss the differences between Inflation and recession and which is worse for the economy.

So if you're like me, you know it can be scary thinking that the U.S Dollar could ever collapse, and you start researching the country's economy. You stumble upon Inflation and recession and wonder what exactly they are.

The Differences between Inflation and recession 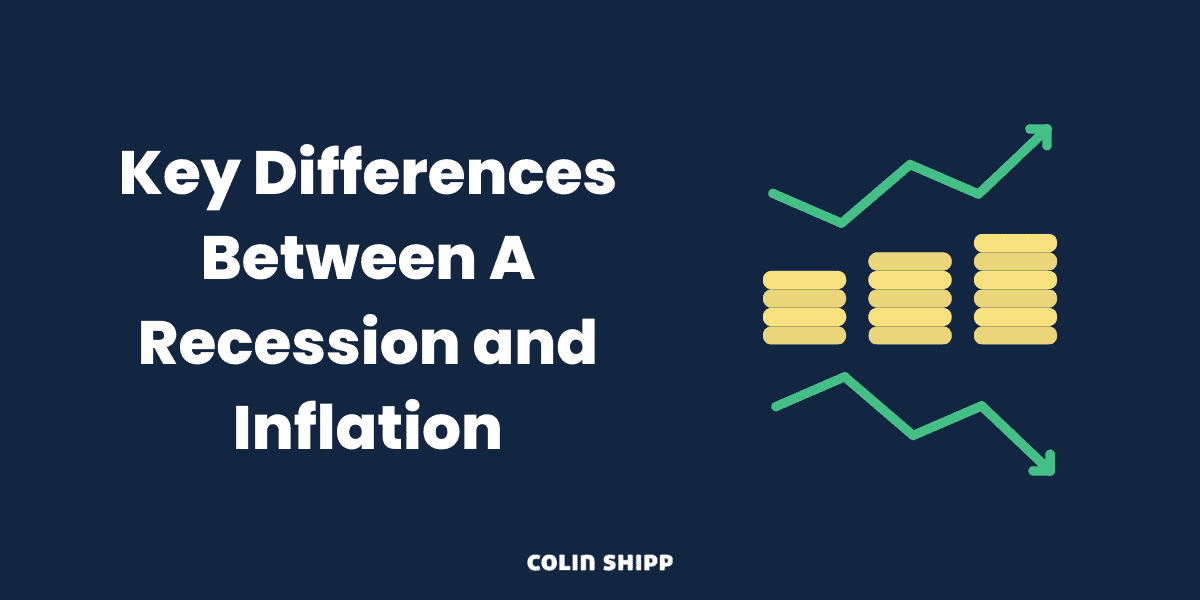 Inflation and recession both refer to economic conditions but are pretty different. While many want to make more money and protect our assets, Inflation can positively and negatively affect the economy.

So let's discuss the two and end your economic research.

What Is Inflation, and what causes it?

Inflation is when the prices of services and goods rise, and the purchasing power of money falls. In other words, it takes more money to buy the same thing. Several things can cause Inflation.

One is cost-push Inflation, which occurs when the costs of making and distributing a product go up.

For example, companies might raise prices to cover the extra fees if raw materials become more expensive. Another type of Inflation is demand-pull Inflation, which occurs when too much money is chasing too few goods and services.

This can happen when the economy multiplies and unemployment is low. People have more money to spend, so they bid up prices. Finally, interest rates can also influence Inflation. If rates are high, it can slow down spending and help to keep prices stable. On the other hand, low rates can encourage spending and lead to higher prices.

Ultimately, Inflation is determined by a complex interaction of economic factors. But understanding how it works is essential for anyone who wants to make sense of the financial world.

What Is A Recession and what causes it?

A recession is a significant decrease in economic activity lasting more than a few months. It is visible in industrial production, employment, real income, and wholesale-retail trade.

The National Bureau of Economic Research (NBER) defines a recession as "a significant decline in economic activity spread across the economy, lasting more than a few months, normally visible in production, employment, real income, and other indicators."

Recessions are caused by various factors but most commonly arise from economic imbalances. These imbalances can be due to an over-reliance on one particular sector, excessive consumer spending, or problems in the housing market.

When these imbalances occur, it can lead to a sharp decrease in demand for goods and services. This decrease in demand can cause businesses to lay off workers and reduce production. As spending and production decline, so does economic growth. This ultimately leads to a recession.

How Are Inflation and Recession Measured?

Which One Should You Be More Worried About?

On the surface, it may seem like Inflation would be the more problematic for bad economic outcomes. After all, who doesn't want to avoid the increased cost of living? However, recessions can have a much more devastating impact on your finances.

For one thing, during a recession, businesses tend to cut back on hiring, which can lead to substantial increases in unemployment. Even if you have a job during a recession, your wages will likely stagnate or decrease. In contrast, while Inflation may lead to higher prices, it also leads to higher wages. 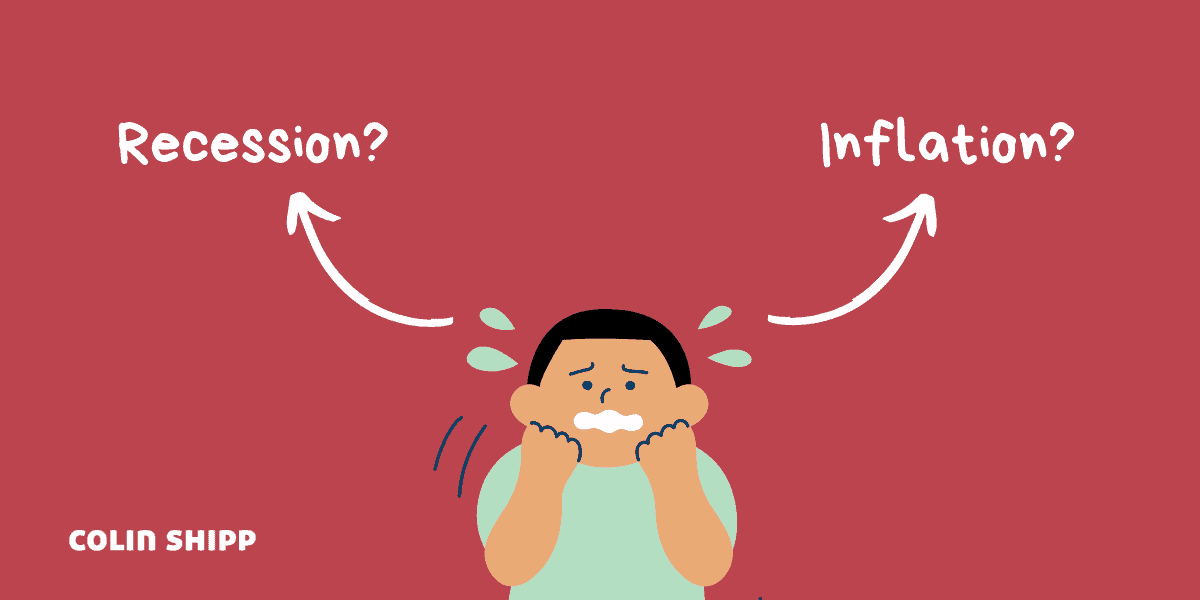 As a result, your overall purchasing power may not be as impacted by Inflation as your session. A prolonged period of economic decline can lead to substantial increases in unemployment and reductions in wages, making it very difficult to make ends meet.

In contrast, while Inflation may make some items more expensive, it is not likely to have such a dramatic impact on your standard of So, while both Inflation and recession can have severe consequences for your finances, you should be more worried about a recession. Living.

What Are The Effects Of Each For The Economy

A recession is a significant decline in economic activity lasting more than a few months. A rise in unemployment can often accompany this.

The effects of a recession can often be felt throughout the economy, with many consumers cutting back on spending, businesses reducing investment, and the government implementing austerity measures.

This can lead to a reduction in GDP growth, an increase in unemployment, and a rise in poverty levels.

While the effects of a recession can be severe, it is essential to remember that economies typically bounce back over time. With careful planning and implementation, the impacts of a downturn can be minimized.

Inflation can have several effects on the economy. Most notably, it can lead to higher prices for goods and services. This, in turn, can lead to decreased spending by consumers and businesses as they attempt to stretch their budgets further.

Additionally, Inflation can erode the value of savings and investments as the purchasing power of money diminishes. Inflation can also encourage debtors to default on their loans as the real value of their debt decreases.

As a result, Inflation can have many detrimental effects on the economy. However, it is worth noting that not all forms of Inflation are harmful. For example, some economists argue that a moderate inflation level can help stimulate economic growth.

Consequently, the effects of Inflation depend primarily on its severity and duration.

How Can You Protect Yourself From A Recession or Inflation

Let's review a few options if we ever had fewer jobs or financial emergencies.

Although your money might not have the same purchasing power during a period of Inflation, it's still important to save and have an emergency fund. With interest rates rising and inflation occurs, this will provide financial security for unexpected expenses or job loss during a recession.

I recommend saving up to 6-12 months of your revenue, while a rising inflation rate may mean you'll need to save more.

Inflation can devalue traditional currencies and investments, such as stocks. Consider investing in assets that have a more stable value, such as gold or real estate. Gold IRAs allow you to convert your retirement funds into physical gold, protecting you against Inflation.

So if you want to beat the stock market, consider investing in gold.

While prices rise and we still earn the same profit margins, consider diversifying your income with an online business. This can become a steady source of revenue during periods of economic downturn and protect you from Inflation. Look for low-cost and low-risk options, such as blogging or copywriting.

Starting an online business can become in high demand depending on your learning skills.

After doing this myself, I've learned your income and increase substantially, and you have more control on an ongoing basis.

Diversifying your investments during economic activities can help protect against recession and inflation's adverse effects.

Consider investing in various assets, such as real estate and precious metals. This can reduce the risk of losing all your investments in one market downturn or experiencing major losses from Inflation.

Additionally, it's important to continually reevaluate and adjust your investment portfolio as production costs rise and possible Inflation occurs.

Related Blog Post: The Guide To Investing In Silver

So now that you know the differences between inflation and recession and some ways to protect yourself, it's essential to monitor the economy and adjust accordingly.

Try not to scare yourself, as many economists predict recession and Inflation at some point, but it's wise to be prepared.

Augusta Precious Metals Download Your Guide
We earn a commission if you make a purchase, at no additional cost to you.

You can protect yourself during economic downturns and rising inflation rates by maintaining an emergency fund, investing in assets such as gold, starting an online business, and diversifying your investments. 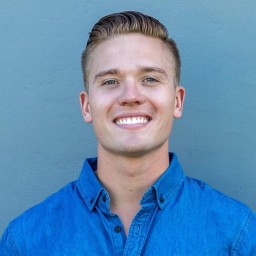 Colin Shipp is a marketer who has been working remotely full-time since 2015. He specializes in growth marketing, content marketing, online courses, and remote work. On ColinShipp.com he writes about strategies he is using in his own life.

Invest In A Gold IRA Today

Augusta Precious Metals is our #1 pick for investing in gold.